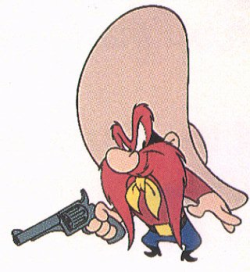 Otis has been telling us about a Surf Guitarist he heard busking in the underground walkway under London’s Science Museum. Apparently he was so good, you just wanted to jump in the soup and slide.

Anyway, one detail that caught Otis’s ear was a lick the guitairst added at the end of Secret Agent Man by The Ventures.  It was the familiar outro to Looney Tunes cartoons. He played it as a group of children passed by and it turned heads.

We thought we’d try it on the harmonica and it’s there! You might like to add it to your repertoire. Grab a C major 10 hole diatonic and make out in first position (straight harp).

Now show all your friends. Unless of course they’re hunting Wabbits. In which case, be vewwy, vewwy quiet.