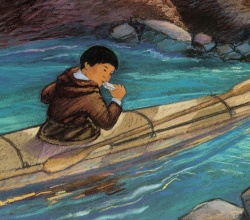 Omu is an Inuit boy. When a trader visits his village, Omu swaps his hunting spear for a shiny new harmonica. This makes his father angry, so Omu runs away from home.

Omu’s heart was heavy. Only when he was alone, playing his music did he feel good.

Paddling out to sea in his Kayak, he befriends a pod of Orcas (killer whales) and makes up special tunes for them on his harmonica. 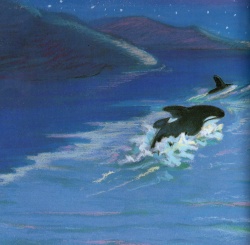 Through the story we learn about Inuit culture, special Inuit words and Omu’s polar world. We learn about Omu’s love for his whale friend Skana (another tribal word for Orca), his passion for the harmonica and his beautiful surroundings.

Omu’s parents eventually find him, but what do they think of his new music skills?

Whale Brother is published by Walker and Company (ISBN 0-8027-7460-1) and can be ordered through Amazon.com. The fabulous illustrations are by Gretchen Will Mayo.