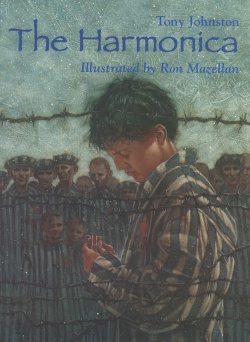 The Harmonica by Tony Johnston

The harmonica is a true story about a boy from Poland who survived life in a concentration camp during the Second World War.

I played the harmonica while my parents danced. In our dream we believed the world to be good.

One day Henryk’s family were arrested by Nazi soldiers. They were separated and Henryk never saw his parents again.

I played for them – with all my heart 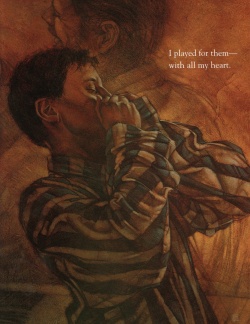 You can find out how Henryk survived the holocaust and how important the harmonica was in keeping him alive; how it provided him, and other prisoners, with hope.

The Harmonica is suitable for Key Stage 2 children, with adult supervision. We recommend it is read with a grown up who can explain the experiences of Jewish families in Europe during the Second World War.

The Harmonica is published by Charlesbridge (ISBN 978-1-57091-489-8) and can be ordered through Amazon.com. The fabulous illustrations are by Ron Mazellan.

3 thoughts on “The Harmonica by Tony Johnston”