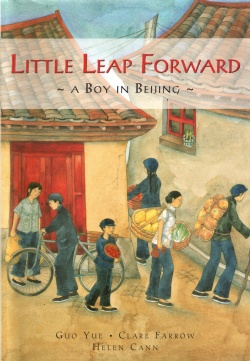 Here’s a musical story  which doesn’t actually feature a harmonica! It was written by someone who plays a Chinese relative of the harmonica called a Bawu.

The Bawu looks just like a traditional Chinese flute, the Di-Zi. It is made from a long piece of hollowed bamboo, it has finger holes and just like the Di-Zi, you blow the Bawu to make it sing.

So how on earth could the Bawu be related to the harmonica, how is it different to the Di-Zi and what is the story of Little Leap Forward?

Come with us on a magical journey to China and all will be revealed.. 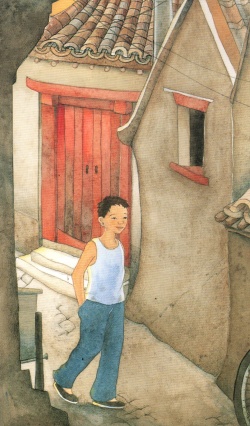 With music…you will always be free.

The title of the book, and the main character, is an English translation of Guo Yue’s Chinese name.

Little Leap Forward lost his father when he was five years old. He grew up with his mother and sisters and hoped to become a musician, just as his father had been. His best friends were a boy called Little Little and a girl called Blue.

Little Leap Forward remembers his father practising the Chinese Violin. ‘Just remember,’ he once said to me, as he made a red boiled sweet appear as if by magic out of the red silk velvet lining of his violin case, ‘with music and your imagination you can travel anywhere; you will always be free.’ 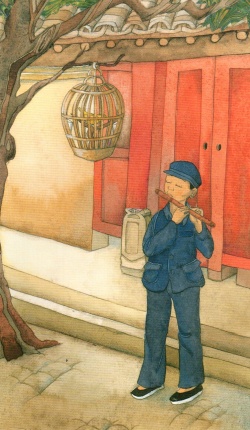 As cunning as a spider weaving its web

Little Leap Forward is published by Barefoot Books (ISBN 978-1-84686-113-0) and can be ordered through Amazon.com. The fabulous illustrations are by Helen Cann. You can find out more about Guo Yue at his website. 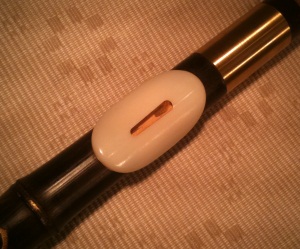 The secret of the Bawu, is the single, pointed metal reed, which sits inside its mouthpiece. You can just make out the reed in this picture.

The mouthpiece is the slotted white section. The reed is the golden, metallic part inside the slot.

Unlike flautists, instead of blowing across the mouthpiece with pursed lips, Bawu players press their lips against the mouthpiece and breath into the slot. This vibrates the reed, giving the Bawu its unique voice.

The harmonica relies on a number of flat-ended, metal reeds for its sound. So, although it looks like a wooden flute, the Bawu is a cousin of the harmonica and also belongs to the ‘free reed’ instrument family.

Watch Guo Yue’s story and hear the sound of the Bawu.Now enjoy the story as it is enacted with puppets, masks and costume.