It’s the law to learn harmonica at school in Belgium

Sofie aged 8 years came home from School recently and announced to everyone that she’d found the most fabulously freaky harmonica fact in the whole world.

According to the book 1001 Cool Freaky Facts,  if she was living in Belgium, Sofie told us she would have to learn the harmonica at school, or else she’d be breaking the law!

We checked out the book Sofie found and sure enough, the chapter entitled Sixty-Nine Ludicrous Laws says exactly what she told us. It’s fact number 537.

A terrific piece of tooting trivia, but is it really true? We contacted the publisher, Hinkler Books, and they

helped us investigate matters further. It turns out that in the Flemish speaking region of Europe – that’s parts of Belgium and pretty much all of the The Netherlands – playing a musical instrument is part of the school curriculum.

In other words, children learn an instrument during the school day, rather than after school at a music club or with a private music teacher. Beside the recorder, the harmonica is a popular option. So perhaps Freaky Fact number 537 is not entirely accurate, but it’s very close! 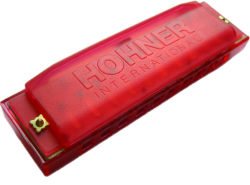 Either way, perhaps this is why one of the best harmonica players in the world comes from Belgium. His full name is Jean-Baptiste Frédéric Isador, Baron Thielemans. Which is a bit of a mouthful by any standard. So he’s better known as Toots Thielemans!

If you would like to buy your own copy of 1001 Cool Freaky Facts (ISBN 1-7412-1951-5), you can find it on line at Amazon. Meantime here’s Toots Thielemans in action. See you soon for more bonkers bulletins.